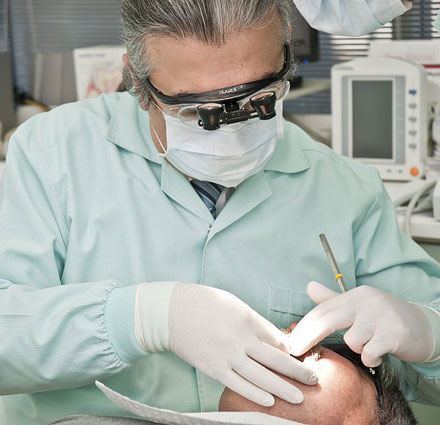 Millions of bacteria live in our mouths; if bacteria are allowed to accumulate on our teeth, they form what is called plaque. Bacteria live about 72 hours, if they are not removed by flossing and brushing, the bacteria die and release toxins or poisons into the gum tissue, gums will become red and may bleed, this is called gingivitis. As the accumulation of bacteria continues, these toxins will begin to penetrate the gums, causing the gum to detach itself from the tooth. The next step in the progression is the destruction of the bone and supporting tissue of the tooth. This is called periodontitis. Dr. Budzinski performs non-surgical periodontal treatment. Non-surgical therapy, root planing, removes the bacterial toxins from the tooth surfaces. Once removed, the gums can reattach, eliminating the progression of the disease. Following periodontal treatment, Dr. Budzinski encourages patients to have their teeth cleaned every three months to prevent reoccurrence.

Periodontal disease (referred to as gum disease) is a widespread occurrence, and if left untreated, it can lead to more severe problems. When patients visit our periodontal treatment clinic at Racine Dentistry located in Racine, WI, we often ask if they are noticing any of the following symptoms:

Do not ignore these signs, since advanced gum problems can result in loss of teeth as well as overall poor health.

The buildup of plaque on your teeth can result in gum disease. Plaque and bacteria combine to begin infecting the gums, and before you know it, you have periodontal disease, which develops in two stages.

Prevention is better than cure, so regularly visit Racine Dentistry located in Racine, WI, to avoid having to attend to severe gum disease issues.